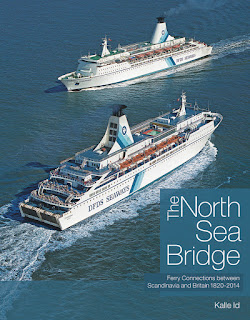 I am happy to finally officially announce that this year will see the publication of another book by me. The North Sea Bridge – Ferry connections between Scandinavia and Britain 1820-2014 will, es the name suggests chronicle the history of the passenger ferry services between Scandinavia and Britain (plus Finland and Iceland to Britain) from the beginning of regular scheduled services right until the closure of the last passenger link in 2014.

Those of you who speak Finnish might be familiar with my very long article series on the same subject in Ulkomatala, published in 2015-2016; the book will be a translated, expanded and generally improved version of the article series.

Projected publication will be in December this year, while the projected page count will be 160. For the most eager amongst you, the book can already be pre-ordered from the Ferry Publications website here.
Posted by Kalle Id at 08:14 No comments:

Email ThisBlogThis!Share to TwitterShare to FacebookShare to Pinterest
Labels: Books by Kalle Id

Happy belated new year to all Kships readers! There was a bit of a hiatus over christmas and new year, as you probably noticed – in addition to being "regularly busy" with the festivities, there were also other issues of a personal nature that kept me from the regular update schedule. But now we're back and hopefully will be back to the weekly updates.

Today, we will look at an older photo set that, for some reason, I neglected to post when it was brand new: interiors of the Wasaline Vaasa-Umeå ferry Wasa Express from my & Bruce Peter's trip onboard her back in 2014.

For those interested, the history of the Wasa Express was covered in a previous entry, which also includes my (so far only) exterior shots of her.

Before making judgements on the Wasa Express based on this entry, please remember that the photos are from 2014 and many of the interior spaces have since been refurbished. Wasaline are, of course, planning a replacement for 2021 delivery – I guess I will need to do another trip to Vaasa before then and document the Wasa Express again. Not an unpleasant prospect, as the service and food onboard were some of the best I have encountered on any ship, even if part of the ship were, at least at the time, in need of some TLC.

Decks 9-11 – all passenger spaces onboard the Wasa Express are found on decks 7 and 8. Above are the bridge (on deck 10), crew spaces and open decks accessible to passengers.

Deck 8 – back in 2014, this deck had the bar forward, passenger cabins amidships, and kennels, conference rooms and the children's playroom aft. Since then, the aft areas have been reorganised so that there is now a sitting lounge and an extra-cost business lounge there in addition to the kennels and conference rooms.

Deck 7 – here were (and still are) the cafeteria, à la carte restaurant, shop and the information booth. New additions since 2014 are the children's playroom (moved down here from deck 8) and buffet restaurant, which replaced the (at least on my trip unused) second cafeteria aft.

Decks 3-6 – the ship has two double-height car decks, allowing it to carry a pretty impressive number of lane metres considering what a small ship we're talking about.

Kships, as always, will return.
Posted by Kalle Id at 16:16 No comments: