Megastar in Tallinn and on the Gulf of Finland, 5 March 2017

I am deviating from the advertised programming again to give a somewhat more newsworthy entry. As people will probably be aware, Tallink Grupp and Rauma Marine Constructions signed a letter of intent to build a new fast ropax ferry for the Helsinki-Tallinn route last Thursday. Although not said outright in the press release, the ship looks likely to be based on the Megastar, albeit with improvements – an artist's impression that was originally included with the press release (but pulled after a few hours) showed a version of the Megastar with additional cabins up on Deck 11 (a nescessary change, as the Megastar has insufficient cabins for the crew and they actually have to accommodate crew in cabins originally meant for passengers). According to Shippax, the public room decks will also be rearranged compared to the Megastar, so it remains to be seen how much of a sister ship the new one will really be.

Anyway, since the new ship will at least be related to the Megastar, I thought we'd look at her again.

For interior views of the Megastar, see here.

The photos below show the Megastar arriving at Tallinn (first three) and on the Gulf of Finland approaching Helsinki (the last three) on 5 March 2017, all taken from onboard the Silja Europa. As per the normal procedure, click on the images to see them in larger size.

Next time: Spirit of British Columbia (this time for real)
Posted by Kalle Id at 17:26 No comments:

I haven't been too successful at keeping up the planned update schedule of putting up a new entry every weekend. But at least we're back to weekly updates, even if the update day seems to be Monday. And on this particular Monday, we are looking back to last January, when I was arriving at Gdansk onboard the Baltic Princess (a trip on which you can read more here) and encountered some slightly rarer ferries for me, even if they were in rubbish weather.

Unlike the other ferries seen at Gdansk (Mont St Michel, Pride of Rotterdam and Spirit of British Columbia), the Stena Scandinavica is a ship I have encountered before, and you can read the brief history of the ship, as well as look at some additional photos, in the first entry on her. What makes out current photos particularly interesting is the fact the ship was still carrying the special funnel colours celebrating the 50th anniversary of the Gothenburg-Kiel route.

So, the photos below show the Stena Scandinavica at the Remontowa shipyard in Gdansk on 11 January 2018, photographed from onboard the Baltic Princess as she was arriving at the same shipyard for a refit. As per the usual, click on the images to see them in larger size.

Kships will return. Unless something else comes up, I think next time we'll round up the Gdansk visit with some photos of the Spirit of British Columbia.
Posted by Kalle Id at 16:03 No comments: 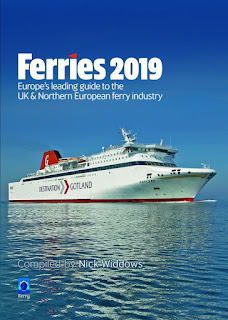 There is once again a new book out with a contribution from me: the 2019 edition of Ferry Publications' now-annual Ferries. And like with the entry on last year's Ferries, I have to start by apologising for the somewhat belated entry on this. We recently moved to a new apartment, and trying to find the time to do everything that needs doing normally plus slowly but surely putting everything in its right place in the new apartment is taking surprisingly long.

For those who are not familar with the series, Ferries 2019 is a database of all Northern European car/passenger ferries in international service, plus all ferries sailing in intra-British or Irish services, and roro cargo ferries sailing to/from Great Britain and Ireland. In addition to the extremely useful database, there are four articles in this year's edition: "A Short History of Polferries" and "Unity Line – A Baltic Success Story", both by Matthew Punter, "DFDS in 2018 – Masters of the European Seas" by Kai Ortel, and my own offering "Viking Line Today and Tomorrow."

As the name suggests, my "Viking Line Today and Tomorrow" is an overview of Viking Line's operations as they are today, plus a look into the newbuilding currently under construction in China and some thoughts on how the new ship is likely to effect the company's future. With the international readers in mind, I have tried my best to explain the different business models of the different services, and the varying products offered.

Matthew Punter's twin articles on Polferries and Unity Line are both wonderful explanations of the histories of these two big Polish, state-owned ferry companies. Not that much has been written in English on either company, so I think Matthew's articles here are highly welcome.

Ferries 2019 is available in well-stocked booksellers. If you happen to live somewhere (like Finland) where no such sellers exist, my prime recommendation is order the book directly from the publishers.
Posted by Kalle Id at 14:49 1 comment: