So, these are from the very conventional vantage point of Kustaanmiekka, showing the ship passing through the Kustaanmiekka strait. As per the usual, click on the images to see them in larger size.

Next time: Since we're in the heat of the summer cruise season, I shan't make any precise promises. Photos of the Mariella in her new livery from the same day as these await editing on the computer, and both the Serenissima and the first visit of the Ocean Dream in Helsinki are in the pipeline for near-future photoshoots.
Posted by Kalle Id at 16:16 No comments:

The summer cruise season in Helsinki actually begun three weeks age, with the Costa Pacifica opening the season on 1 May. For my part, a combination of other commitments and poor weather meant that I did not have a chance to open the photo season until today. But I did it with a fine ship, and managed to get photos of both the Silja Symphony and Mariella in their new liveries in the process. You will get to see those later, as today we take a look at the Marco Polo.

For a brief history of the Marco Polo, see the first entry on her. For those wanting a more detailed look at this fascinating ship, I heartily recommend the book Marco Polo - Celebrating Fifty Golden Years of Ocean Travel by Richard Clammer. The book is published by Ferry Publications and you can buy it from the Ferry Pubs website (and yes, Ferry Pubs did publish my book too, so this is a bit of an advert).

Anyways, to the photos! Which show the Marco Polo departing Helsinki Eteläsatama (South Harbour) on the afternoon of 20 May 2015, photographed from Lonna. As per the usual, you can see the images in larger size by clicking on them.

Next time: Either the Silja Symphony or (if I head out to photograph tomorrow) the Arcadia.
Posted by Kalle Id at 22:16 No comments:

Because obviously there weren't enough photos of the Star in this blog yet. As per the usual, the photos below show the ship departing from Helsinki's Länsisatama, this time on the afternoon of 18 March 2015. Click on the images to see them in larger size. 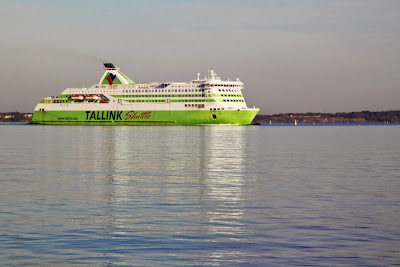 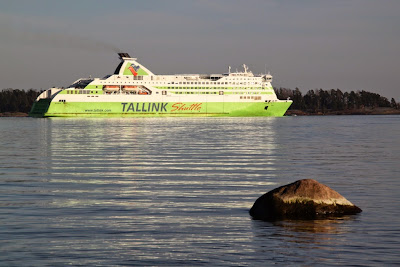 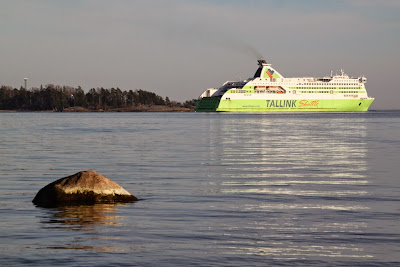 It's been almost two years since Viking Line's Isabella became Tallink's Isabelle, so it's high time the ship be featured here - even if the images aren't perhaps quite up to the usual quality.

Since this is the first time the ship has been featured here under its current name, it's high time to also update her history. Note that most of the text here is copied from the first Isabella entry.

The Isabelle started life as the Isabella, the second of two ships ordered in the mid-80s by SF Line from the Brodogradiliste Split shipyard in the (then-)Yugoslavia. Her older sister Amorella was completed for the Turku-Stockholm service in 1988. Isabella was planned to follow in 1989 and she was to be placed on the Naantali-Kapellskär -route. However, the port authorities of Kapellskär were less than thrilled about the thought of expanding their harbour to accommodate the Isabella (and her envisioned running mate, RAB Slite's Athena). In the end Naantali did expand their harbour to accommodate the new ships, while Kapellskär did not. To make the best of the situation, SF Line decided to place the Isabella on a new service linking Naantali to Stockholm when she was delivered in June 1989.

Originally the Isabella was planned to be around the year on the Naantali-Stockholm service, but this proved unprofitable and instead she was moved to doing 25-hour cruises to nowhere from Helsinki for the 1989-1990 winter season. For the summers of 1990 and 1991 Isabella returned to Naantali, but the Naantali-Stockholm service was deemed a failure and from autumn 1991 she sailed exclusively on the 25-hour (later changed to 24-hour) cruise service from Helsinki. In spring 1992 she was rebuilt with the addition of an observation lounge on deck 11, converting the garage on deck 5 into cabins and on the exterior the addition of a red stripe running along the windows of deck 6. During the summers of 1993 and 1994 the Isabella made occasional cruises from Helsinki to Visby.

Following the delivery of the new Viking Grace, the Isabella was laid up and placed for sale. Although Corsica Ferries were rumoured to be interested, no buyer emerged and Viking Line produced plans to reactivate the ship for the Helsinki-Tallinn line for the summer season, sailing as a running mate to the Viking XPRS. At this point Viking's main competitors Tallink did a little math and came to the conclusion that they would lose less money by buying the Isabella than they would if Viking could bring an extra ship in for the summer season. In April 2013 the ship was sold to Tallink; a few days before the sale was finalized, her name was amended to Isabelle and Tallink retained the name - as well as the ship's red-hulled livery.

In May 2013 the Isabelle entered service on Tallink's Stockholm-Riga route, replacing the Silja Festival. In August 2014 she became the sole ship on the Riga route when her running mate Romantika returned to the Stockholm-Tallinn route following the charter of the Silja Europa to Bridgemans Services. It will be interesting to see if the Isabelle will remain the sole ship on the Riga run for long - and what else the future has in store for her.

The photographs below show the Isabelle at Stockholm Frihamnen on the afternoon of 3 May 2015, photographed from onboard the Silja Symphony. Click on the images to see them in larger size.